Although I live in the UK, I often get questions about what is different about Christmas the Danish way.

First of all, Christmas in Danish is Jul - cognate to the old English word Yule - they're pronounced almost the same way.

Keeping the pre-christian name for the celebration is a subtle hint to the emphasis: It still is mainly about the festival; the Jesus story is an optional "add-on".

More generally, Jul is not a date. It is a period of time. Juletid - you even have it in English: Yuletide. "Tid" in Danish means "time" or "a period of time". Nowadays it is basically "all of December" (and a few days of January) although in the past it could have been anything between 3 days and 12 weeks. There are also hints of this in English - for example you have "The 12 days of Christmas".

Obviously the Jesus story is now a staple diet of Christmas, but similar to other events appropriated by Christendom, many "pagan" elements remain.

One of the promoninent pagan element are "Nisser" - which roughly translates to "Elves". These are mythological creatures which live in your house all year round. They are generally not evil (unless provoked) and to stay on their good side you would always leave a treat out for them. If you mistreat them, you would expect them to eat your grain during the summer months, misplace your shoes or even kill your livestock. If you treat them well, they would help around the house in small ways and generally bring you luck. Basically, they were magical little creatures with a fickle temper and funny pointy hats.

Nowadays, the elves have morphed into Santa's helpers, but appear to have retained their small stature and headgear.

Another pagan element you will often see is Julebukken - the Yule Goat. This symbolises Thor's 2 goats (Tanngrisnir & Tanngnjôsr) who would be responsible for handing out presents (they are ever-replenishing after all)

Nowadays the Santa Claus character has taken over the responsibility of doling out presents, but Julebukken often remains in the decorations.

Yuletide is all about family. It is the darkest part of the year (but not the coldest - that comes later!), and the winter solstice was generally considered the "half-way" point: From here on the days would get brighter. So it is a good time to get together with family to celebrate the half-way point. The main elements are:

The total of the above would roughly translate to "hygge" - a concept which doesn't really exist in English.

About the food: Traditionally, a pig would be slaughtered, and we would would enjoy some lovely roast pork (with nice thick crackling), boiled potatoes with gravy (not the runny Engilsh variety, but "proper" thick).

Interestingly enough, the number of births still tend to peak in August and September.

In terms of decorations, we're still very much influenced by the Germanic traditions: The christmas tree is a must. And since apples were generally too heavy for the branches, candy canes and baubles work as substitutes. When I was young, I remember having actual candles on the christmas tree.

Looking back, I have no idea of how we survived; we also had a playful cat, which managed to escape the picture: 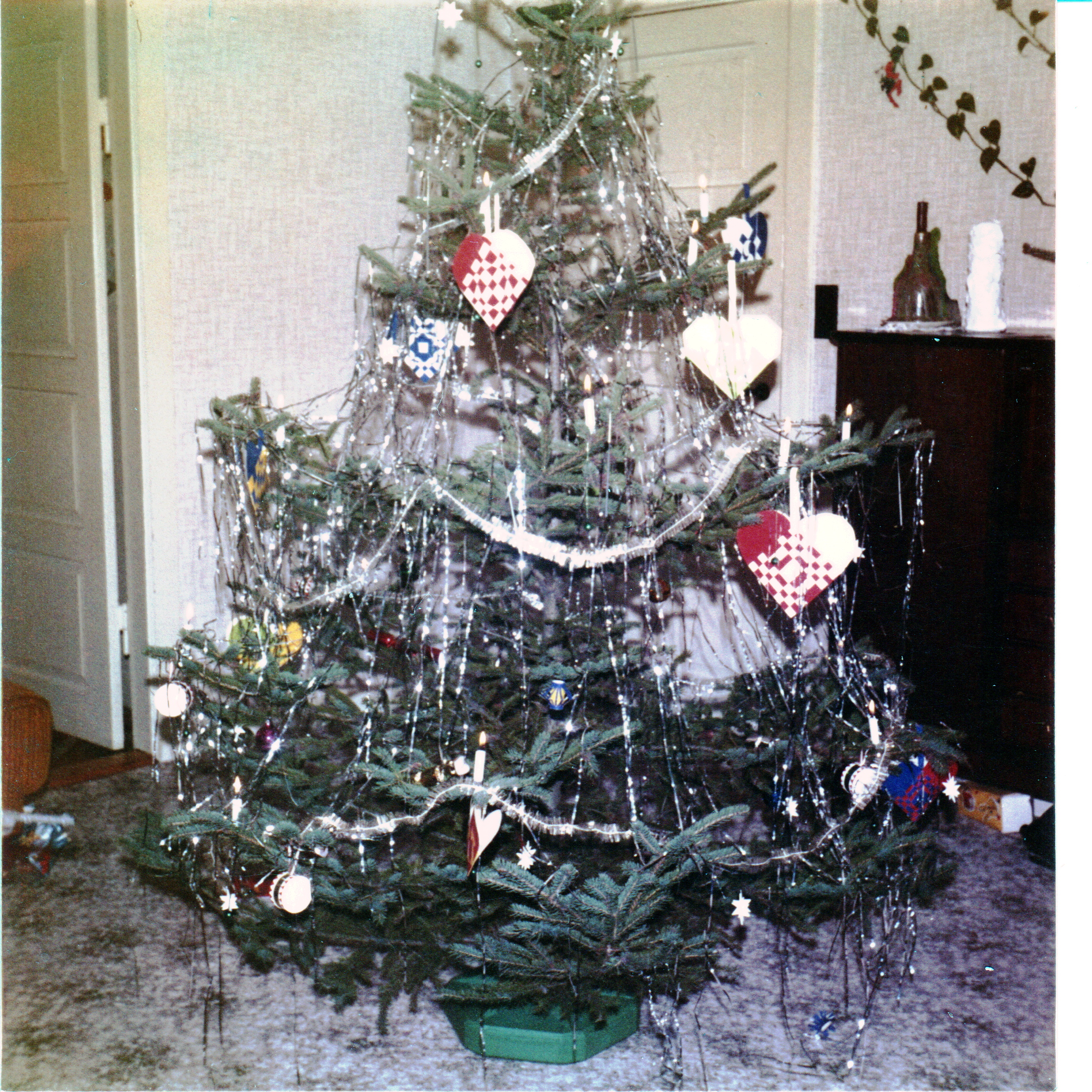 (I know. Christmas tree fashions have changed a lot.)

One thing which appears to be a Danish speciality: Pleated christmas hearts. As kids we would spend a fair amount of time making them - and they look great. Having something that you made on the tree for everybody else to see is really something - especially for kids. The hearts also served another purpose: They would serve as containers for sweets and goodies, and then hung on the tree. This was also a status symbol: A rich family would have a bigger tree - with more sweets in it!

The main event is on the evening of the 24th of December: Christmas Eve!

As a staple part of Christmas we would also have the christmas songs: we all join hands in a circle around the tree and walk around while singing songs - "Højt fra træets grønne top" ("High upon our Christmas Tree") is probably the most popular one.

I suspect the joining-of-hands was mostly a ploy to stop kids from grabbing the sweets inside the christmas hearts - although usually not a successful ploy. It kept us kids somewhat quiet while the adults were singing something about Bethlehem.

And then finally for the main event: the giving of the presents. This is pretty similar to the English; it would usually end up rather chaotic with hordes of hyped-up kids (already high on sweets) trying out their new toys, while adults adored sweaters and slippers.