A post about some maths homework caused some consternation and confusion on one of my local facebook groups: 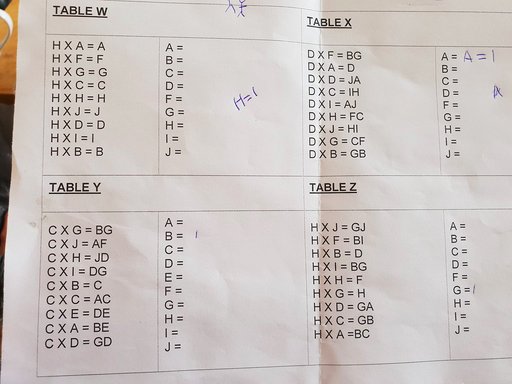 Lots of people seemed to think this was far too advanced for a 9-year-old, or that solving such puzzles would have no applications in real life.

I beg to disagree.

Yes, I admit that solving the puzzles takes a sizeable number of steps, and might test the concentration of your little ones, but the steps themselves are easy to understand and easy to execute. They do require a decent understanding of numbers though.

The underlying principle of solving any maths equation is to use the known facts to derive other things which we can treat as new facts. And then using those facts to derive even more stuff.

In other words: Common sense. You can formalise this into propositional calculus, first-order logic or whatever you like, but at the end of the day it is common sense. Or rather: common sense on stereoids.

In this sense, the puzzles presented to the 9-year-olds are less about formal maths than general problem solving: Using what you already know to figure out stuff. Which then allows you to figure out more stuff. Rinse and repeat ad nauseum. Surely this is something an education system is meant to do!

It was presented on facebook without much context, but there are some reasonable assumptions to make here:

A quick refresher on notation:

This is the easiest one to solve - it's basically a taster: 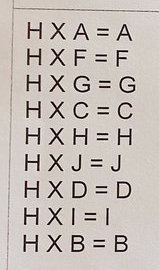 And that's it! The remaining letters can represent whatever digits you like (including zero), and the equations will all be true.

Here we step up the difficulty level slightly:

Yes: the authors skipped the letter E for some reason....

Plugging in those values into the remaining equations revals the value of some more letters:

We can then use the newly found value of \(I\) and \(H\) in one of the other equations:

And we then know the values of all the letters - even though we haven't "used" all the equations yet.

Here we step up the difficulty level even futher. We have 10 letters, but still only 9 equations: 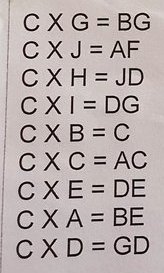 From \(C \times B = C\) we can conclude that \(B = 1\). Yes, the devious teachers hid it in the middle, rather than presenting it as the first equation! They expect you to understand the principles by now!

But then it gets slightly trickier...

As before, we can take the values we know so far and plug into one of the remaining equations to develop more knowledge:

which leaves F, H and J as unknowns and no letters (yet) representing 0, 5 or 9. And these two equations are yet to be solved:

Which leaves the last equation:

In this table we're back to 9 letters (for some reason the authors decided to miss out on the letter E again!??) and 9 equations:

... after subtracting \(J\) from both sides of the equation:

And since the only factors of 10 is 2 and 5, then one of the following must be true:

So it must be the case that \(H = 3\), as this is the only value which can satisfy both the previous 2 paragraphs!